Talking to several Cosworth owners this past week on COOLING in followup to thread at miata.net. Again, street owners don't seem to have any issues at stock boost levels. But some track drivers with the Cosworth supercharger have been telling me they need to give up full throttle after a few laps when ambient temps are high and let the car cool down for a lap because they are seeing water and oil temperatures peak to 250+ range! We have NEVER had issue with our supercharged 2007 despite running many track events where the air temps were over 100 F... and we are pushing the blower to 12 PSI+. For a long time I figured the difference was that we had the big upgraded AWR aluminum radiator in our car, and water/meth injection and the folks telling me of temp spikes don't. But this week I spoke to one of FM's customers for this blower who is a track user and frustrated about cooling issues yet he is using a similar radiator upgrade to what we have. In the phone call we discussed that we also use Meth/Water injection for additional cooling in our car and that may make the difference (Water injection has a cooling effect on the blower, engine head, valves, and cylinder walls, etc).

However, certainly another BIG piece of the puzzle is our MazdaSpeed Nose. I recall when we bought this nose that one promise it came with from Mazda was better aero AND better cooling. Only today did I do some rough measurements to compare stock nose and the MazdaSpeed nose. Sure enough, the difference is significant. The large upper "mouth" in the factory 2006 nose is roughly 29.5 x 6.5 inches or less (the oval shape is much less aggressive than the more square main "mouth" in the MazdaSpeed nose). Perhaps somebody with the 2009+ can post rough measurements....won't be surprised if newer cars with the higher redlines have more generous airflow than the earlier cars. In comparison to my 2006 nose, my MazdaSpeed nose is a full 31x7 inches at widest points! A similar percentage of the nose opening is not actually open with both (bumper bar is behind the closed off pastic, etc). Without getting out some fancy math to compare the total area, and somehow including fact that larger upper mouth on the MAZDASPEED nose is also more aggressive shape, it is clear that the Mazdaspeed nose takes in MUCH MORE AIR through that main opening. Also, the lower 'slit' opening on the MazdaSpeed nose is half an inch taller than the same feature on the factory front. And we have the front splitter forcing more air into that lower opening. Add it all up and my guess is that the advantage could be as much as 20 percent more air through our MazdaSpeed nose.

Thus, might be a good idea for track users of this or any boost kit to consider alternative noses!

Picture of our MazdaSpeed nose on 2007 with my wife autocrossing the car last weekend. 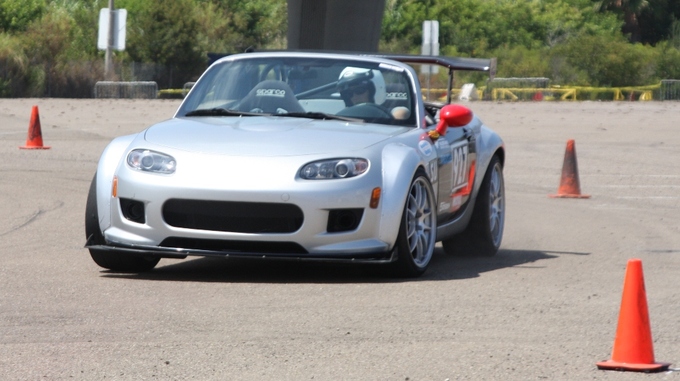 Re: Cosworth and COOLING

Brian wrote:Thus, might be a good idea for track users of this or any boost kit to consider alternative noses!