Background: This NC and was purchased used. It is an auto trans car. Stock performance was as expected: somewhat higher acceleration and stronger midrange than my stock 67k miles '99 NB and very considerably stronger than my girlfriend's 103k miles NA. I soloed and tracked the NC. It was responsive and seemed to have plenty of power. I did not dyno it before making changes.

In September 2011, I installed a Cosworth supercharger kit and AEM water/meth injection kit at 37k miles. There were no important problems during the install, just some minor fit issues.

After the install, the car fired right up, still on the original tune. It idled fine and "blipped" just like it did before the install. I took it out for 12 to 15 miles at slow speeds, without kicking in the boost. There were no apparent problems. The car seemed just as before except intake noise was noticeably "hissy." During this first outing, I went once to around three quarter throttle from a roll in second gear to make sure the supercharger actually made some boost. Whoa!!! Rocket car!!! INSTANT SPARK KNOCK!!! Stop that instantly! Go home. Start the tune process. Very happy and expectant.

I contacted calibrator who provides a tune with the kit and received the first tune via email. Installed the tune (with minor software hassles thanks to Windows Vista).

With the first tune, another new car! But this one wouldn't pull the hat off your head. Very, very conservative. No spark knock, but I was back to stock (or less) performance, even though an Autometer mechanical boost gauge showed it making 8 lbs.

I data logged the car (with another $500 gadget), sent in the log and promptly received a second tune. Loaded the tune. No noticeable change.

The tracing of ALL DYNO PULLS ON BOTH MACHINES showed high variability within the horsepower and torque curves. In other words, the overall shape of the HP curve was about what you'd expect: rising steadily until a peak near 6.3 k RPM with a gradual drop off beginning thereafter. But, within that nice, smooth HP curve, the individual data points were highly variable around the central trend.

I talked to both calibrators, the guy who actually wrote the tunes and the guy who ran the second dyno. Both suggested the boost might be "blowing out the spark" under load. They suggested I switch to a colder plug with an smaller gap.

I installed fresh NGKs gapped at 30 thousandths. When I took the car back to the second dyno, it pulled 151 HP, then 139 HP on the fresh NGK plugs. Cut off the water injection, same numbers (Water alone apparently does nothing.). The same variability in the HP and torque curves is apparent. The curves MAY be a little smoother.

The original calibrator sent me another tune with 4 degrees of spark added. I've loaded that. Haven't yet made another $75 dyno pull to see the results. But seat of the pants tells me nothing is changed.

The car drives fine. On back-to-back 2-18/19-2012 track days (with 450 lbs of driver and coach aboard), I ran the car hard all day in 20-25 minute sessions without incident: no knock, no overheating. It pulls smoothly in midrange and runs out of stuff around 100 mph -- just like before. $6,500 later, my over all impression is still that midrange is somewhat improved over the bone stock used car I bought and the supercharger sounds cool when you stand on it from 3k RPM up. But it makes about the same HP as an NC with a cold air kit and muffler.

How's your gas mileage? Or, since you're logging, how's the mixture look? Are you dealing with Mike Mann, or someone else?

Log the exhaust, look at the air/fuel ratio. This will tell you if the maps are ok.
If they are then start looking at the spark advance mapping. Unfortunately, it looks
like the tune is off and not giving you full performance.

Sure sounds like you are not getting the air in the motor. Had two early customers jam their bypass valves with a coolant line (motor would rock over under load and press against the coolant line and jam the rod that controls the bypass). Had another early customer with air blowing out seal toward the rear. I would go back through the install.
Brian Goodwin
Good-Win Racing
www.good-win-racing.com

Thanks, all, for getting back to me. I think I answered all your questions. See what you make of all this.

jboemler -- "How's your gas mileage? Or, since you're logging, how's the mixture look? Are you dealing with Mike Mann, or someone else?"

Yes, Mike is working on my tune. I suspect "pulling his hair out" is more like it. He has been very responsive and patient. Mileage and AFR info follow.


morrisg -- Log the exhaust, look at the air/fuel ratio. This will tell you if the maps are ok.
If they are then start looking at the spark advance mapping. Unfortunately, it looks
like the tune is off and not giving you full performance.


Brian -- Sure sounds like you are not getting the air in the motor. Had two early customers jam their bypass valves with a coolant line (motor would rock over under load and press against the coolant line and jam the rod that controls the bypass). Had another early customer with air blowing out seal toward the rear. I would go back through the install.

The bypass is clear of everything: hoses, wiring, bulkhead. I had to move a couple of things during the install. But I just rechecked it and it is clear to function.
I just rechecked the intake air path for birds and squirrel nests. It's all clear and the filter which came with the Cosworth kit is still clean.
On the leak, during my install I found an improperly shaped "supercharger inlet support bracket" would have caused an intake air leak on my car. But I caught the glitch. The bracket would have held the front end of the inlet up and prevented the tube from sealing to the supercharger main housing.

LATEST: MotoEast just sent me another tune with a couple more degrees timing and a little leaner. I'll log that and see how it feels. Calibrator said i don't need to go back to the dyno until I start having traction problems. (I wish!)

Couple of more questions:
If a cat was plugged or some other blockage in the exhaust, how might that affect my AFR. Would the O2 sensor and tailpipe log still show the same?
What's the easiest way of checking the cat(s) for blockage? Cut and look?

Might want to contact Jay (Blackone) over at Miata.net. He has some experience with Sniper and could help you troubleshoot.

OM-ARC wrote:Might want to contact Jay (Blackone) over at Miata.net. He has some experience with Sniper and could help you troubleshoot.

Thanks for the lead. I'll try to get in touch with him.

I have appointments for compression test and "borescope" (for lack of a better term) the cats, two weeks out. Will post outcomes on the forum.

More background on the NC:

I took the car to a local shop. Shop owner races in SM and has a good Staff.

Compression runs 215 - 220 lbs across all four cylinders
Measuring back pressure at the O2 Sensor shows 2 lbs.
They found no leaks at the intake/ head interface and no mechanical problems with the install.

I've attached (I think) prints of three dyno runs. Only parameters are HP and Torque. Look at the short term variability in the HP and Torque outputs. Usually (specially with smoothing) those curves are nice and smooth. There's a clue there to my problem. But no one (including DynoJet) has seen that characteristic before. 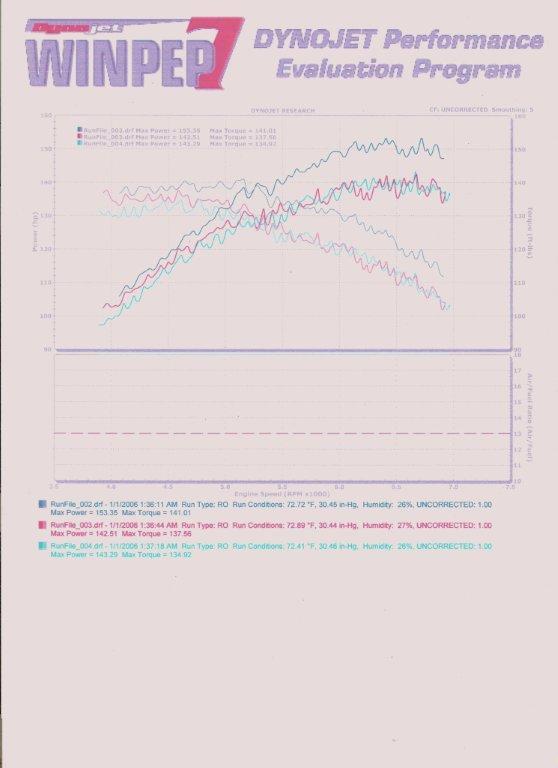 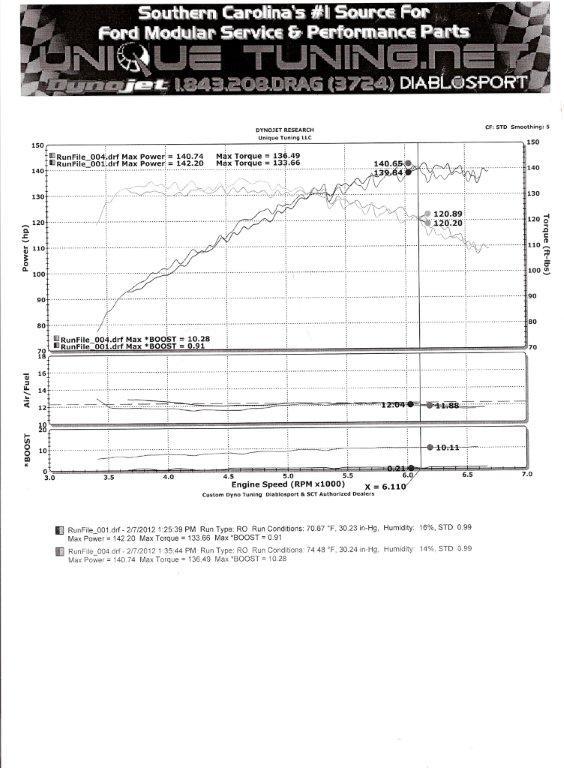 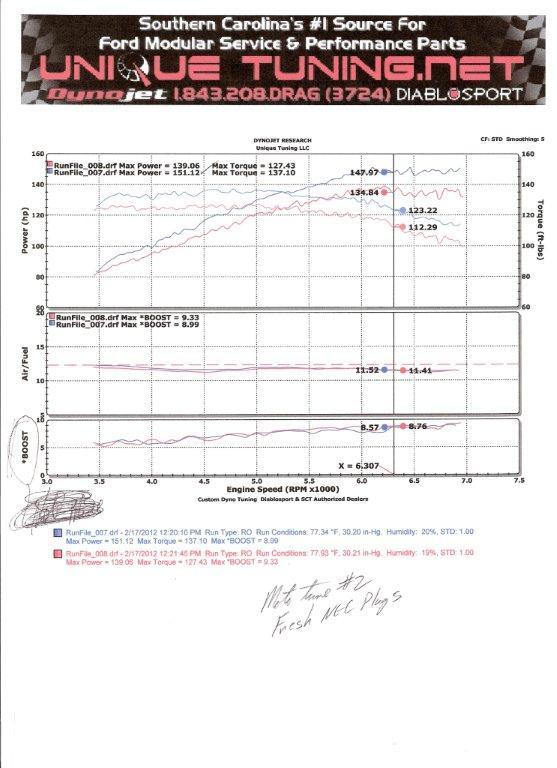 I know a few people have asked you to check to make sure the bypass is not getting stuck and you verified that it is clear of hoses. On some models the mechanism will get caught on the brake lines when the engine rocks. I had to bend my lines out of the way.

You can check to see if boost is developing using scangauge, ultragauge, dashdyno.

Indeed, bypass or some other mechanic source or leak is resulting in the air not reaching the cylinders.....it's the only reasonable explanation. Bypass is the most likely source.

Either that or the converter is stuffed/melted resulting in no flow...I think you mentioned a joy ride in the car BEFORE doing the tune? It would not take much of a joy ride without the tune being loaded to melt down the cat (except this should result in really HIGH boost readings and since you are not getting that, I am back to my first sentence above as the logical source).
Brian Goodwin
Good-Win Racing
www.good-win-racing.com