Do you have any info on where we can get the alternator and other lightweight accessories on your Nc Light?

We used an Edge Racing alternator, saved some pounds, worth the effort. We just made two brackets to mount it to existing bosses on the engine and then used a string to figure out the belt length. I recall that Cosworth was offering a kit for 2.3 Duratec that included mounting bracket and belt but it was for 2.3 as configured in Formula Atlantic use...and if memory serves it didn't fit our 2.5 (though the details of precisely why escape me at this point). So, I got just the alternator somewhere online (that also escapes me at this point) and took it from there.

It does a great job of charging the battery but ECU does not like it, gives me a 'battery' light. I imagine Mike at MotoEast could turn that light off forever but it does not bother me enough to do anything about it.
Brian Goodwin
Good-Win Racing
www.good-win-racing.com

Here is what the Cosworth kit looked like, and I notice there is one on EBAY currently. Included light water pump pulley and other goodies shown. Wish I could recall why it was not going to fit our 2.5, if you chase that answer down please post it. 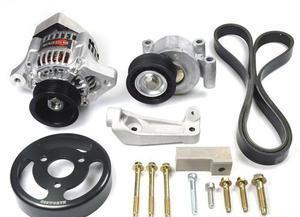 After this post had a few folks ask if we could still get the full kit shown above.

YES, talked with Cosworth and they have one 2.0 kit. Race cars only, does NOT fit with A/C.

I went back to my notes to try and remember why we did not use the full kit with our supercarged 2007 and now I am reminded that besides not working with A/C, it will also not work with the supercharger belt setup.
Brian Goodwin
Good-Win Racing
www.good-win-racing.com

Man I would love to jump on that, but I've got something a little more exciting in the works.

It's all about incentive. With a tiny battery, and no alternator, you just HAVE to drive fast!

jboemler wrote:It's all about incentive. With a tiny battery, and no alternator, you just HAVE to drive fast!

More info later, but let's just say my car should be a little more powerful next season..... NA of course.

Has anyone ever tried this pulley kit?