Aligned and ready to rock!

Got a new tech at our regular alignment shop, didn't understand the relationship between giving up some Caster to get the camber numbers we wanted. We wanted -1.6 camber or better and got just -1.5 all around. Slight toe out front, slightly toe in rear, good enough for first event and will try again after things settle a bit with our setup. 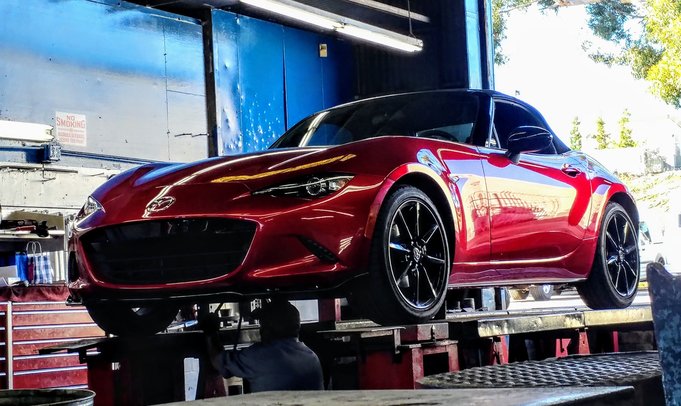 Practice day complete. We were well reminded of the compromises of running CS. I rarely keep a car in Stock/Street class for long because it's just so tempting to leap into a class that allows proper setup of the car, the springs and sways it wants at BOTH ends of the car to go fast. The CS rules allowing just one sway change really screws things up, and we do our best to fix the balance with bumpstops and adjustable shocks. Standard Koni is rebound adjustable, ideally a double adjustable choice would have avoided issues we faced today, but trying to do CS on a budget, so we play more with the stops and 'off the shelf' Koni that so many enthusiasts will use.

So what happened? The hard stops are a good balance for the big front Progress Bar on compression, but uncontrolled as we 'bounce' off those stiff bumpstops. This forced us to run rear KONI at full still to control the rebound that otherwise made the rear super light and coming around on us constantly as we 'bounced' off the rear stops if KONi were any softer for rebound. Tried various settings with the front KONI but anything stiffer than 1.5 turns from full stiff caused initial push on turn-in until the rear stops were loaded up. So, that's the worst of both worlds, light turn-in push or heavy turn-in oversteer as car rebounds off the stiff rear stops too fast. We did our best to adjust to the setup, but after practice to the shop it went and on lift again late today for yet another combo to try.

For those keeping score at home, started OEM front stops with aftermarket medium 58mm rear and result was too much initial push until we landed deep in that harder rear stop. Changed to hard rear stops at full stock height (seeking intentionally to 'overdo' it and see if we could make the car pointy). Problem is the KONI cannot really handle that setup as we would like. So, now moving to third combo for tomorrow which is medium 58mm rear on stiff base bushing (total equal to stock bumpstop height). What I hope happens is more progressive rear with the combo of hard and medium, bit softer landing and slower load up of rate at the rear stop and bit softer release coming up off that combo stop that doesn't need KONI at max rebound to control it. To put it another way, the line was too thin at practice day between pushy front and oversteer rear, seeking to widen that middle ground a bit. Competition day tomorrow, will see!
Brian Goodwin
Good-Win Racing
www.good-win-racing.com
Top 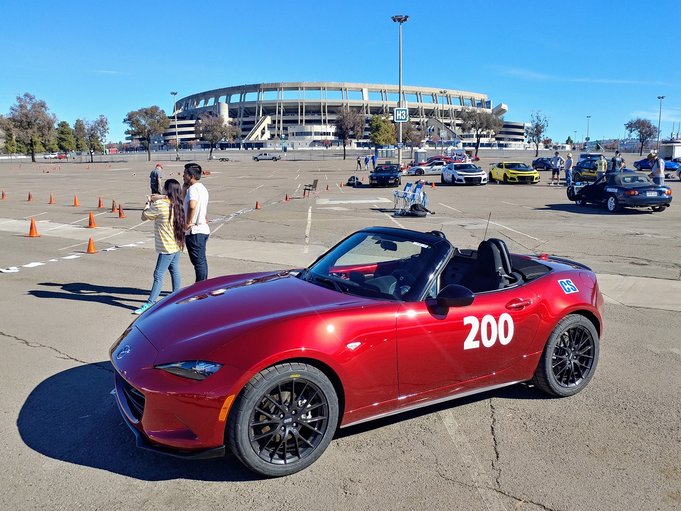 We won CS, and Top Time of Day during the early run groups, Top Pax too! In a field full of multi-national champs my friends and fellow CS competitors are fast guys, regularly top pax for the day here, currently number 3 and 4 on our local "Driver of the Year" standings behind Jeff Keisel who has seemingly endless national championships in his Turbo Rotary Sprite. So, we had excellent fast competition to run against today and really see ND1 vs ND2, and gauge our level of prep to date.

Course was fast, really fast. Co-driver Ryan Passey (recently off his dominating Global Time Attack Championship win his his V6 "HyperMiata") drove first. It's been a while since Ryan has autocrossed anything, let alone soft 'Street' class car. Result was his first two runs were throw-aways as he got to speed, found the course. His third run put him in contention, about half a second behind the leaders Scott and Nima. His fourth and final run set TOP TIME OF THE DAY, leading the class as he handed the keys off to me. No doubt a few more runs would have seen Ryan drop more time.

Scott and Nima were doing 2 tints each before trading off in the same car, so they each had 2 runs to go when Ryan was finished with all 4 of his runs and leading the class. Since Ryan was giving me a car ready to rock with hot tires I attacked the first run and lost it on the fast downhill section, no DNF but not fast. Second run I reset the Top Time of Day to 54.9, Scott and Nima by this time had bested Ryan's time but my 54.9 on the second run was far enough ahead that I figured I had the win and could focus on experimenting on gearing choice. Third run I went to third gear really early, too fast for the next section and coned the exit cone from that section. Last run came and by this point it was confirmed that my 54.9 was fast enough to own the morning session so I laid into the car to see how much quicker I could get it, reset Top Time of Day to 54.4.

So in the end our 2019 had a solid win in CS on first outing. Our change last night after SCCA practice yesterday back to medium rear bumpstop on thin bit of the hard bumpstop we cut proved the right strategy and the car was better today. Have we found the ultimate setup? NO way, we are just starting the journey, much more to test. We have merely found what worked with the standard Koni Sport shocks and Progress front bar on this day.

Did the 2019 extra 500 rpms to redline make a difference today? YES, though the analysis is a bit of give and take. On the run out from start there is a fast section where the ND1 guys were running out of 2nd gear and they tried 3rd and found was not enough time in 3rd to get 'much' advantage, they did some subsequent runs through there against the rev limiter in 2nd, though fastest for Nema was 3rd gear through that section. In that same section I too tried 3rd gear and it lugged in ND2, was not helpful, was not enough room to really use 3rd gear to advantage in ND2, did my winning runs in 2nd gear, hit the redline but just briefly, so 'I think' advantage ND2 with 500 more rpms to redline in that fast section but without an overlay of GPS data it is hard to make any hard conclusions for that section.

On the other hand, coming down the hill there was a fast section into the finish that required 3rd gear for both ND2 and ND1, but it was low enough in rpms for 3rd that ND1 was much more in the peak of their torque curve than ND2, advantage there to ND1. I expect the next season will be a very interesting back and forth and results will continue to be course dependent, if both ND1 and ND2 need 3rd gear anyway, ND1 will sometimes have the stronger pull in those sections thanks to peak torque coming lower in the RPMs, ND2 won't get to its torque peak on such courses.

A picture is worth a thousand words right?

I 'think' this is an advantage for those on 'off the shelf' KONI like we ran this past weekend, giving ND2 owner ability to balance that front bar with more stop height at the rear. And might not make any difference at all for owners of higher end shock choices with really good compression adjustment, many of those folks with MCS and similar run zero stops. 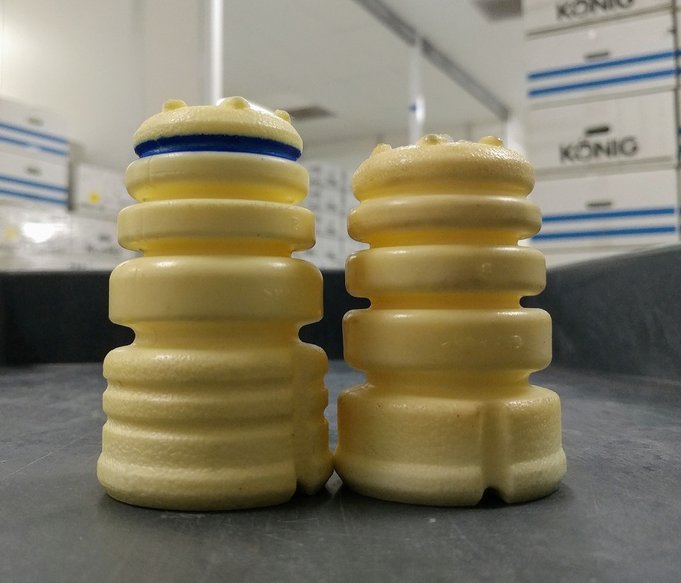 For someone like me using Progress springs on an ND1 Club, would the ND2 stops be preferable? I haven’t installed the springs yet, and I can get some bump stops delivered before I do if it’s helpful to me.
2017 Meteor Gray Club
Top

NathanD277 wrote:For someone like me using Progress springs on an ND1 Club, would the ND2 stops be preferable? I haven’t installed the springs yet, and I can get some bump stops delivered before I do if it’s helpful to me.

I would not recommend it, with lowering springs you would be sitting on the stops all the time. With lowering springs we like shorter than stock stops, more free travel usually a good thing, it's just the odd world of CS balance challenge where we get into this tall stops as a 'potential' good thing.
Brian Goodwin
Good-Win Racing
www.good-win-racing.com
Top 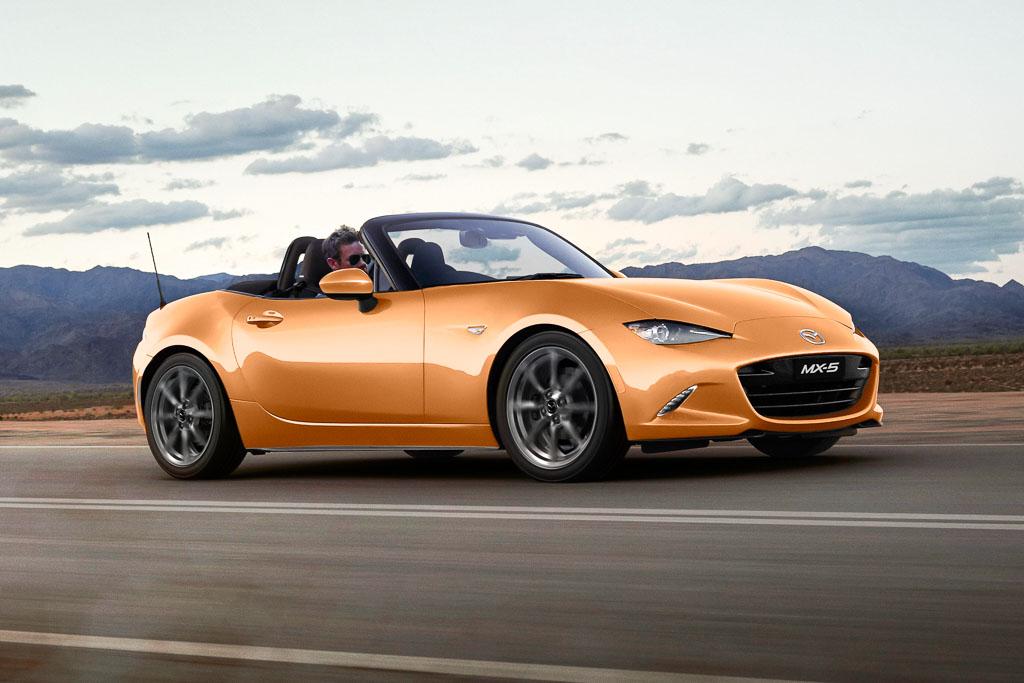 You gonna trade for the 30th Anniversary special?
Top

You gonna trade for the 30th Anniversary special?

Our friends at 949 Racing should get a royalty, appears Mazda liked their orange ND so much they are going to emulate it.

LateNights wrote: You gonna trade for the 30th Anniversary special?

Our friends at 949 Racing should get a royalty, appears Mazda liked their orange ND so much they are going to emulate it.

You know your pic is not a real pic right? Some of the other renditions look suspiciously like the 949 Car, and very much Orange instead of Gold. 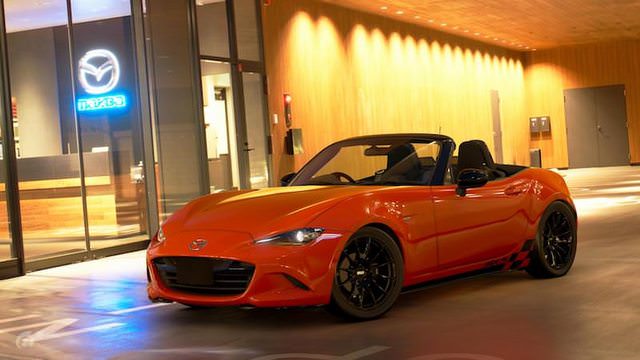