06AT confused with catalytic converter

06AT confused with catalytic converter

I have an 06AT grand touring with 86k miles. Exhaust is Goodwin header, midpipe with converter and Q muffler bought in summer of 09.

Prior to January 2016 I was getting an EGR code and once in a blue moon P0420. Since January I haven't gotten an Egr code have gotten a P0420 code 3 times and now the converter core rattles (hit on housing to find it) but only when in reverse or drive. Rattling doesn't get worse based on rpm's. Also I haven't had any performance issues or fuel mileage issues. 1 year old NGK laser iridium plugs look horrible (image provided left to right is cylinder 1 to 4).

So far the O2 sensors seem to be providing proper voltage. I can control the EGR stepping motor open and shut. And the MAF is fine both voltage and clean.

Where do I go next or recheck because I don't want to buy a new midpipe and have a cat issue again shortly after install. 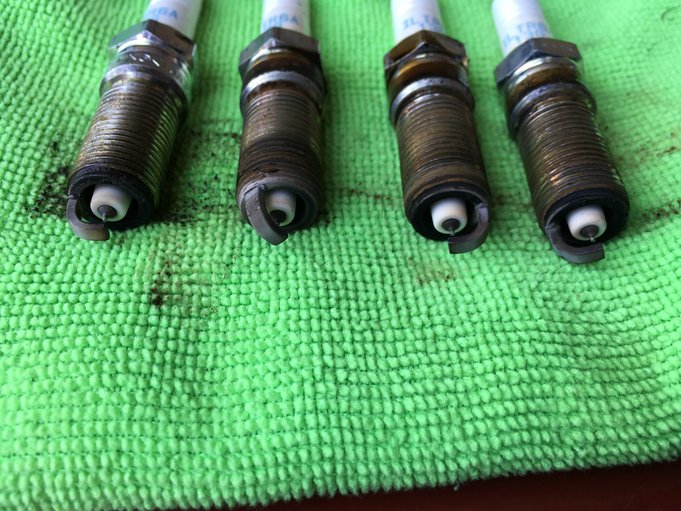 First first guess is bad first O2 sensor and motor not self-tuning properly, with result cat is now burned out. Does this car have a tune? Tune is not required, car should self adjust fuel trims safely if feedback through O2 sensors working right .....but if that first sensor is out of spec it won't.
Brian Goodwin
Good-Win Racing
www.good-win-racing.com

It was tuned back when the exhaust was installed with delta force sniper tune from Moto-East for the previous owner. I'll replace the first O2 then see what's results happen. Then the cat and plugs again. Thanks Brian.

And have Mike do datalog with you. Prior owner might not have given Mike a really good datalog with enough data. Give Mike all the same history and pics of the plugs and talk to Mike about doing updated and cleaned up tune....which will likely add power too.
Brian Goodwin
Good-Win Racing
www.good-win-racing.com

No one tunes with the delta force sniper software anymore. I gotta save and update to ecutek. I can send him data I just gotta get my snap on scanner from work. I've been working on cars for 8 months after getting out of the military doing communications and networking. I have a ton to learn but atleast I find it fun to do.

I do have a couple questions. I inspected my sensors while working today. My afr is 14.3 at idle drops to 13.2 and
maybe a hair more at wot to redline and once I let off from wot it goes up to 20.1. Those figures to me seem about right I am no expert in Miatas but it couldn't be far off I wouldn't think. If it is off what range do I look for when the stoichiometric are is 14.7.1?

Also there is no wiring open or shorted issues all are proper and the ma voltage is proper based on Mazda diagnostic charts for the front O2.

Is there another way that the O2 could be bad or do they show fine but eventually over time just stop working properly even if numbers are around correct ranges?

Sorry I'm just also trying to learn at the same time while fixing my car.

Yep, once you noted you were on old Delta tune my guess changed from O2 sensor issue to out of date or incomplete tune with the prior software that was crude compared to the Ecutek. My suggestion is talk to Mike about upgrade to the Ecutek, it is likely going rich and lean at various transition points.
Brian Goodwin
Good-Win Racing
www.good-win-racing.com

I'm begging to have this same issue or similar (I think) .. Ive had the Max power header, midpipe with converter and street single, for around 20,000 miles now on an otherwise stock, untuned car. A few days ago I noticed an uneven idle and eventually I got a CEL that gave me a P0421 for Warmup catalyst efficientcy below threshold and both P2187 & P2177 for running too lean at idle.. So i decided to change my spark plugs ( and oil while I was at it ). The spark plugs where similar if not worse than NickW353's plugs shown in his pictures.. I decided to pull my battery connects while I did the job so that cleared the CEL and I have put about 30 miles on my car since then. At first it took a minute to find a happy idle but eventually it got to the point where it would idle at about 800-900rpm and pop a bit more on deceleration while rev matching. But after about 30ish miles still no CEL.. It may be that the car has not gone through an entire drive cycle, so I'm pretty certain those codes will come back because the 0421 has come and gone.. But the 2187 & 2177 are leading me to believe the first O2 or the Catalytic Converter has gone bad. I plan to have my car tuned soon, but if I could just replace the O2 or Cat. It would buy me a little more time to save up and tune my car correctly with Motoeast. Does it sound like I am on the right track?

Yep, on the right road. I ended up replacing first O2 sensor in our supercharged 2007 last week. Other sensors can also be involved, using a K&N filter often means dirty MAF sensor if the filter had too much oil on it, etc.
Brian Goodwin
Good-Win Racing
www.good-win-racing.com

I have dealt with the same coding issue that you described for the past six years. I worked with Brian and also with Mike. I did several tuning cycles with the ECO Tune. The backstory is that I had the first Cosworth supercharger installed in the US purchased through Brian. Then several engines in Europe exploded with too much boost.

Cosworth offered to rebuild my engine for free with new pistons, rods, etc. I sent the longblock to them in California and they rebuilt it. My mechanic here reinstalled the engine, which is when my problems began. I also have the same exhaust system you describe, but also a catback muffler with dual exhaust.

Last year the same mechanic finally figured out (after I had replaced multiple parts, including the throttle body and O2 sensors) that the electrical harness had been crimped by the cosworth supercharger and was shorting. It cost $1,400 to buy the last avalable electrical harness and more to have it installed. I now get a couple of codes about once every 2-3 weeks, but it runs smoothly. Before, it would stall when idling or even when driving. Don't know what more I can do to completely rid the codes. I sent my data recorder file to Mike after the intall of the new wiring harnesss and he confirmed the the tune is good.

It has been really frustrating, but I do like the boost.

Users browsing this forum: No registered users and 5 guests