Hi, I'm Greg. I joined the Goodwin Racing team in November. When I joined Goodwin Racing I brought along my 2005 Lava Orange Mazdaspeed Miata. I finally joined the team with my car on track at Chuckwalla Raceway this past weekend. I have already driven both the 2019 ND and our NC Budget Project at autocross.
I will be bringing a different perspective to our forum, newsletters, and other outlets. I do not have the extensive autocross/track experience of Brian or Ryan, so my experiences will be viewed through the eyes of a novice learning how to drive fast. My viewpoint will also entail that of an owner of an NB generation car, and the Mazdaspeeds. I have worked for Rocky Murphy of Rocky's Miatomotive and have spent a lot of time with the NA/NB cars wrenching on them. I hope to share my experiences and make them informative and enjoyable. 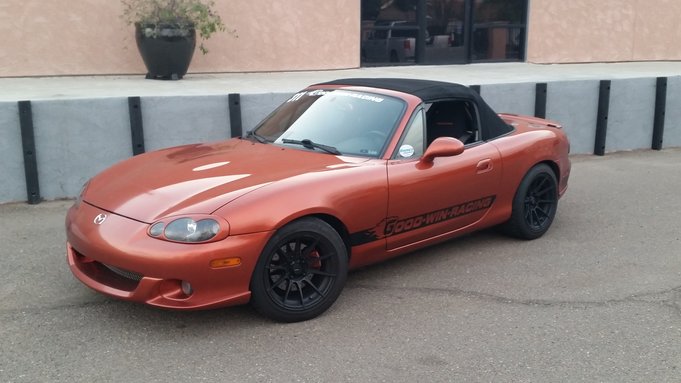 When GWR went to Chuckwalla on March 10th, I had a couple upgrades to my MSM.
For the brakes, I had installed the Stoptech BBK sport size and installed Stoptech rear rotors.
I used Stoptech's 309 compound.
For sway bars I installed a set of prototype bars with four holes of adjustment on the front bar and three adjustment holes on the rear.
The brake kit took a little getting used to, as I had installed the night before the track day (it was very short notice).
The pedal feel was a little vague and I had a couple of lockups early on. I blame part of this on the fact I had installed less than 24 hrs before, and I now feel the car needed the brakes bled again. The pads worked in a linear fashion, increasing in friction as I increased pedal pressure. Another thing that I figured out towards the end of my last session and used in my fourth and last session was to tap the brake pedal a little before my braking zone. I was doing it to get better pedal feel. I was told afterwards about pad knock back. I had floating rotors, so the pads were probably getting knocked back from the rotor and my tap on the pedal brought the pads back to the disc. Doing this the brakes felt much stronger.
I started with the sways on full soft and had lots of body roll. After going one hole from soft in the front I lost 4 seconds. after going to the middle hole on the rear bar I lost another 3 seconds, and after the last session another 1 second. Learning the brakes and adjusting the sways to remove body roll helped me immensely.

Great to see an MSM on the forum. I have a 2004 VR MSM. Any other mods on the car or just brakes and sway bars? Any future upgrades planned?

Lots of mods. The brakes & sways are just the latest. I have tons of photos of my work I want to post as a build thread. However, I just moved three weeks ago and my pc isn't working properly for me to access them all.
I have rebuilt the motor, updated & detailed the engine bay, done some suspension work (with more to come), aftermarket exhaust (update coming to it too) and a lot of other little things. It's been in car shows, been on long road trips, and been out for track days. I've worked to make it an all purpose car.
The Only Speed is Mazdaspeed

That's awesome, would love to see some under hood pics when you get access to them. So far I've done an intake, intercooler, and full exhaust, but I'm in the middle of some major work right now. I have coilovers, sway bars and mounts, endlinks, SS brake lines, DBA rotors, new pads about to go on. I'm still deciding on new rims and tires. I got the car with some ugly 17" aftermarket rims that need to go. Have you replaced your radiator? I'm still on the original and it will probably need replaced soon, but I haven't seen a reasonable direct drop in replacement.

I replaced my radiator with a Koyo soon after I got this car. I had already heard that the MSM can run hot due to the turbo. I never had any issues until after I rebuilt my motor. I do have a friend with an MSM and one time outside of Vegas we were side-by-side with basically the same setups (before the engine rebuild) and he ran hot when I didn't. I have only had issues on really hot days, or during track days, particularly during a track day last summer in Fontana. This past March at Chuckwalla it was cool enough that I was fine. I do have a CSF 42mm Radiator at home waiting to go in. I have a M-Tuned coolant reroute also. I have read on forums that since Mazda redesigned the MSM head gasket that the cooling issue is gone in the MSM. I still moonlight at Rocky's Miatomotive and a few months ago I got the chance to compare the MSM head gasket to a regular 1.8, side-by-side on engine blocks. Now I'm not a Mazda engineer (and neither are 99.9% of forum commentators), but from what I saw, I'm not taking off the reroute.
I also had ugly wheels on the car when I bought it. I got a photo to prove it.
I do have one recent photo of the engine bay. It's pretty dusty, not quite car show clean. 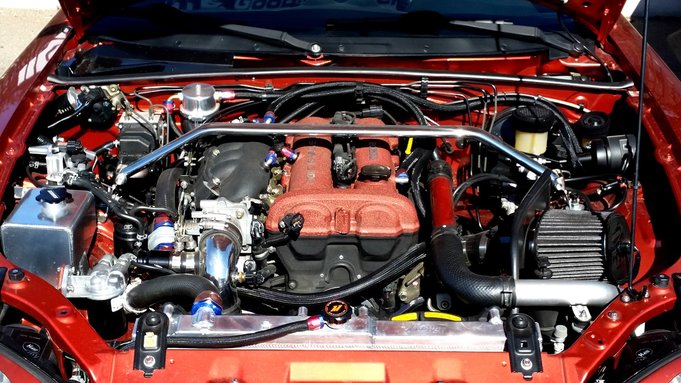 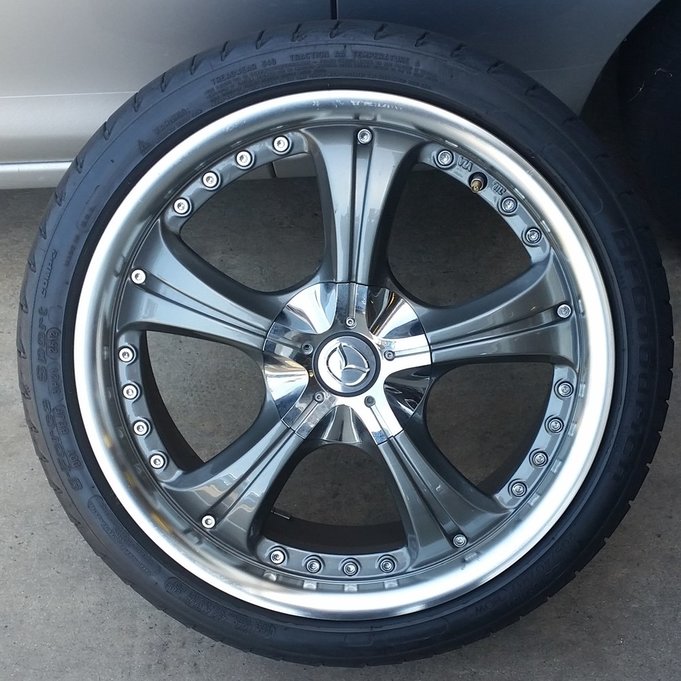 One of the ugly wheels on the car when purchased

Those rims - I feel personally attacked

Looks like this one's going to head the right way though!

The story of finding my MSM is long, so let's just say it was an expensive Route 66 souvenir. When I found it the 1st owner had installed a Boss Frog double hoop roll bar. Also installed was an AEM intake, FM downpipe, aftermarket cruise control (MSM cars did not have cruise from the factory). All good stuff. The car even had every option except the OEM hard top. However, the Racing Harts were gone and these were the wheels on it. The calipers, which came from Mazda painted silver, were painted bright blue. Blue. I repeat, blue, as in nothing else on the car is remotely related to blue.
I still shake my head.
The Only Speed is Mazdaspeed

What are the specs on your current wheel and tire setup?

I'm running 15x8 Advanti Storm S1 wheels with 205/50 tires. I'm a big fan of the Falken Azenis RT615K for street tires. I'm on at least my third set. I have driven on them daily, cross-country, and in weather. I have driven in downpours back east, rain in northern Nevada, and the slick SoCal freeways in the rain and they have been great.
I have also taken them to the track. I have turned a 2 minute lap at Laguna Seca with this setup, and I know they could go faster.