Welcome to the Good-Win Racing Forum. Feel free to tell us who you are, leave any comments or suggestionson how we can serve you better
Post Reply
11 posts

We're going to the Global Time Attack Finals in less than a month! 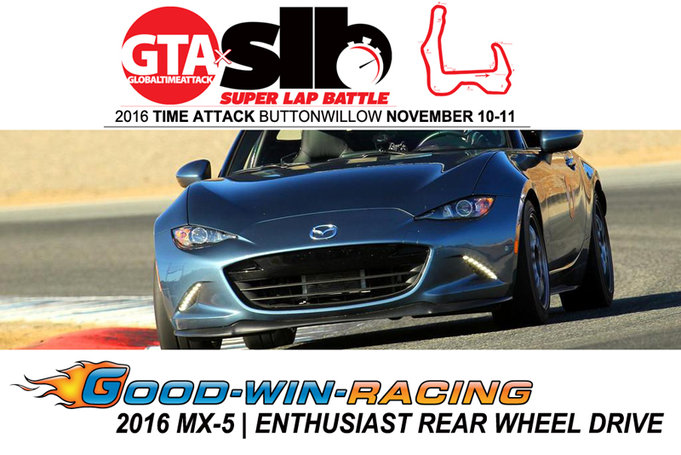 We're taking our 2016 project ND in largely the spec it is in now with many of our fun bolt-on parts, so we'll be in the Enthusiast Rear Wheel Drive class. Can't wait!
Top

Looking at entries for the event, looks like we're going to be up against some stiff competition. There's a couple BMW M3s and a 350Z Track Package in our rear wheel drive category that I expect won't be slow!
Top

Looking forward to Superlap Battle this week with the ND!

Here's the field for Enthusiast RWD, actually some other MX5s coming out! The BMW M3s will be the cars to beat in this field:

The class is limited to tires with treadwear ratings of 220 or greater. This keeps most of the really sticky summer tires that are rated at 200 out of the class. Bit of a gamble here since we haven't done any testing with tires in this bracket, but we went with the Achilles 123S in a rather massive 255/35/17 stuffed on to a 17x9: 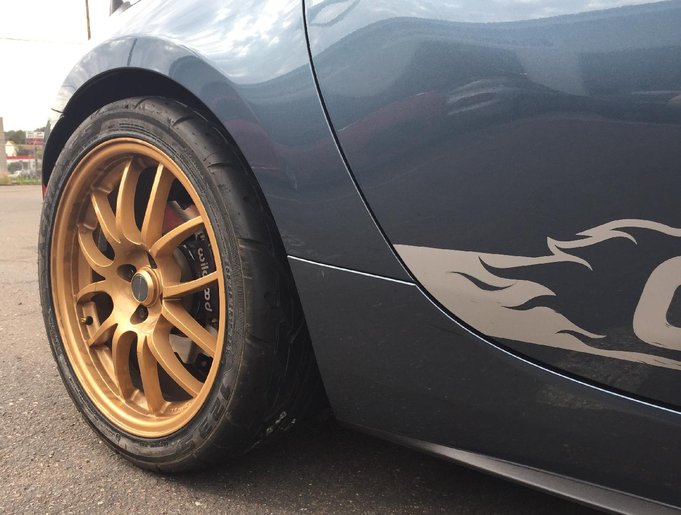 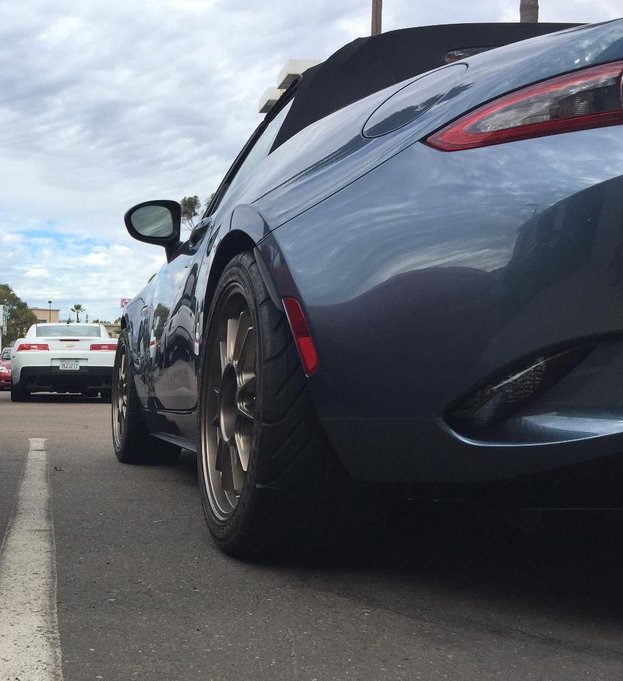 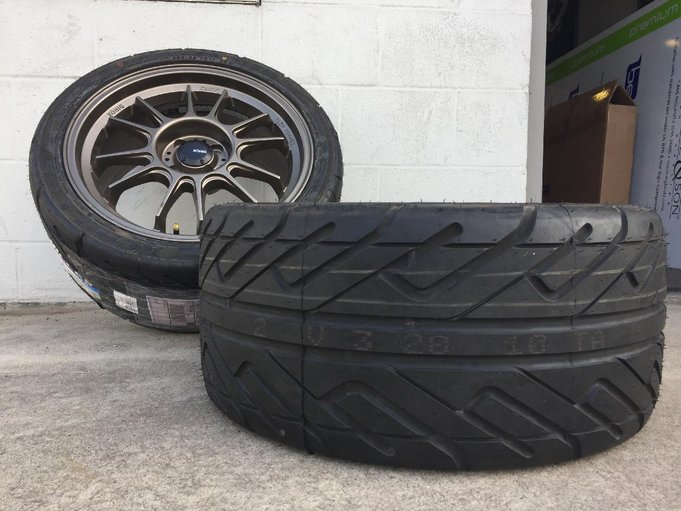 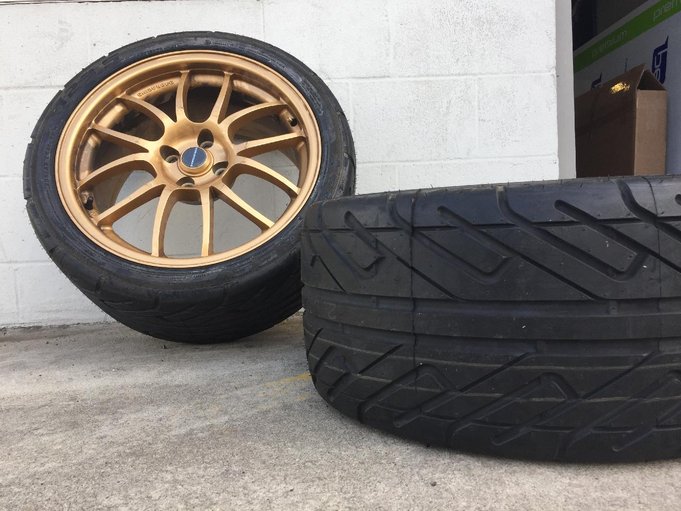 On the trailer and off to the event today!

Global Time Attack's final event of the season, Superlap Battle at Buttonwillow Raceway is perhaps the largest time attack event in the nation with the stiffest competition. Cars are all prepped well for their class, records are broken each year, and this is where we wanted to run our ND to see where it stacks up. 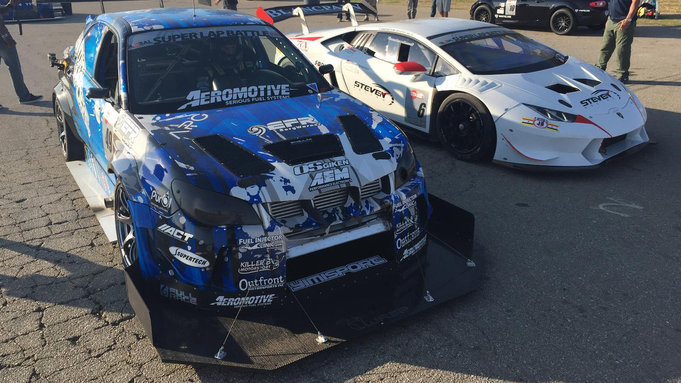 Classes are broken down by varying levels of allowed modifications and we figured that our 2016 MX5 could fit nicely into the entry-level "Enthusiast" class. A quick look at the entries showed we would be up against a field of much more powerful cars including the new Mustang GT with 440hp and a few BMW M3s. We knew we were outgunned in the horsepower department but we also knew we have one of the best handling packages out there, so what better place to see how our ND stacks up to some of the big dogs?

Even the Enthusiast class allows more modifications than we had done to our ND - for example, everyone is running a big wing for extra downforce - but rather than make a ton of changes going into this event we decided to enter it as-is with the parts that we run on it every day to demonstrate what can be done with this package.

Brief run-down of the car as we ran it:

Day 1, there was a lot of testing and tuning to be done. We've never ran these tires before, and they are a real handful until they have enough temperature in them. The first few sessions of the day were spent getting the car dialed in to make the most use of these oddball tires, and near the end of the day the setup was beginning to really shine.

Buttonwillow is a bumpy track with some high inside curbs, and the fastest way around a few of the corners requires very liberal uses of those curbs to straighten the corner out as much as possible. This makes for some full-on two wheels in the air moments as you quite literally jump the inside half of the car over the curb and then land on the far side as you slide out to the outside of the corner. Obviously, suspension is critical to this going well. The Ohlins never missed a beat and with a few adjustments I was able to dial them in to do exactly what was needed over these sections without drama lap after lap. 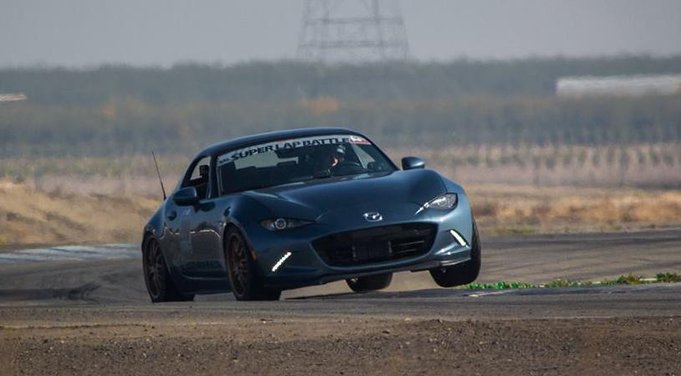 I was really glad for our longtube header setup which maximizes mid-range torque. Up against the big power cars this day, we needed every bit we could get and that mid-range is so important for pulling the car out of each corner to maximize speed down the straights. At the end of each straight our big brake kit brought it all to a halt so fast you'd think the car was on race tires. The brakes gave a very nice predictable feel even through some of the rough and bumpy braking zones, and were dead-on consistent every lap for both days.

With each adjustment of the suspension, tires, etc. each session I was carving a little more time out of my laps. I love that the ND needs to be driven just like the older cars to get the best out of it; it's all about maintaining that momentum. Foot down on the throttle until far later than any other car would dare, then hard on the brakes for just a brief moment to shed juuuust enough speed, and then toss the car through the corner with tires slipping and your momentum carrying you out to the far edge of the track. It doesn't get much better than this! I dare say I was probably having the most fun of anyone on the track.

By the end of day 1 the pecking order was sorting itself out. We were the fastest MX5 in the class with a 2:04.25, with just the higher powered cars ahead of us - and not by much! The Z was only 1 second ahead, with the mustang and an M3 2 seconds up. Day 1 revealed that it was uncharacteristically hot for this time of year so the first session of day 2 would be when the car could be its quickest.

First session of day 2 came and I began pushing hard. First lap out was looking good but there was some traffic. Second lap I made a small error and ended up in the dirt. No! I had to bring the car in to get it checked out and that meant I had missed my best chance at a fast time for the day.

The following session the track temperature was up 30 degrees. I could feel the tires had less grip than in the cooler morning session but I wasn't going to give up and I did all I could to get everything out of them they would give me. Posted a fastest lap of 2:03.9. Faster even in the heat! Third session came and now it was really hot. Going in to it I focused on improving all the little details of the lap where possible. 2:03.6! For reference, that's deep into Spec Miata race car lap times, and this is on street tires.

By the fourth session the temperatures had peaked and there was no better time to be had. Undoubtedly, that 2:03.6 lap would have been in the 2:02’s if it had been in the cool morning. The mistake in that morning session cost me a place on the podium.

As I stand back and look at what we accomplished I’m very enthusiastic for the ND. Only half a second off the podium up against cars with way more horsepower, and ahead of every one of the all-wheel-drive and front-wheel drive cars in Enthusiast as well. This really highlights the capability of this car in the corners. We learned a lot this year and I think we’ll be back next year with more horsepower.

We'll have more photos from the event in the coming days! 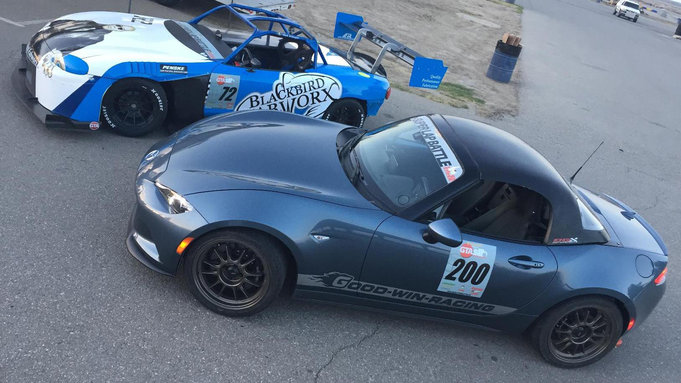 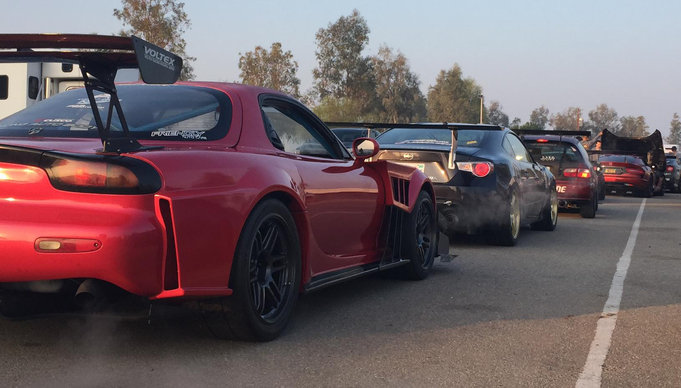 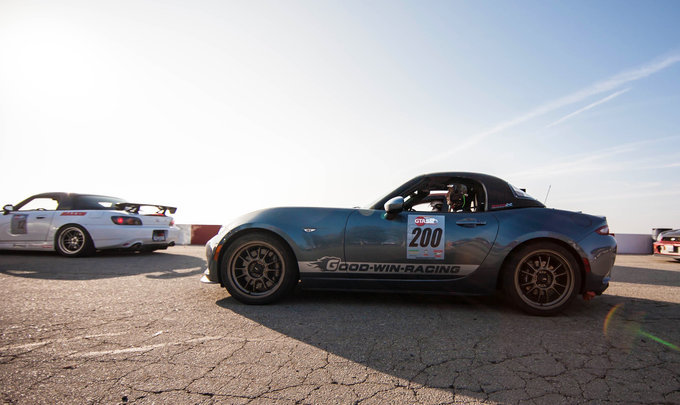 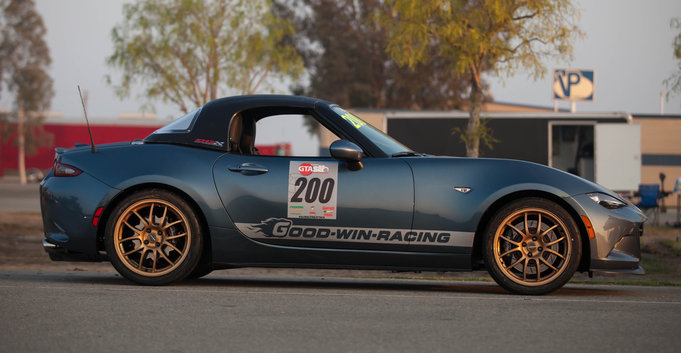 Trying to link to those photos and they are too large! Here they are downsized... 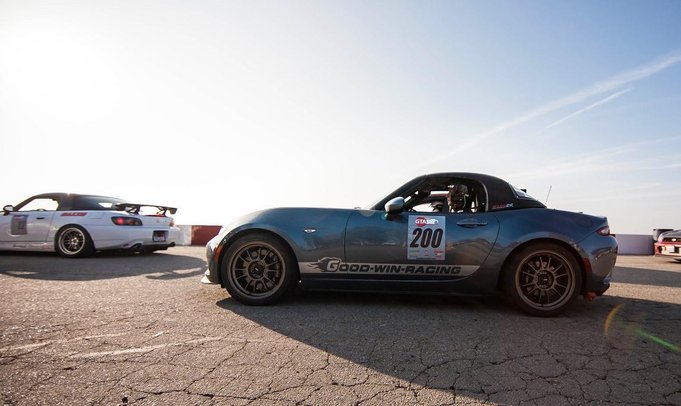 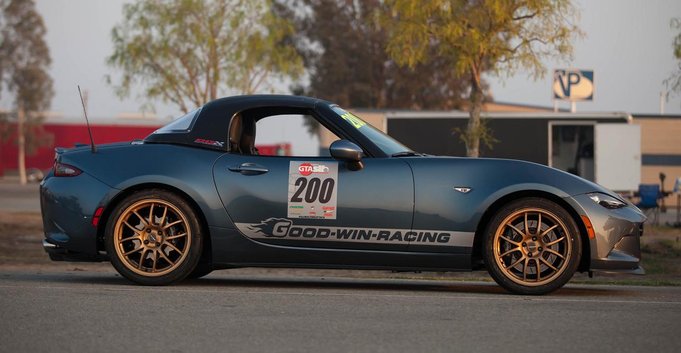 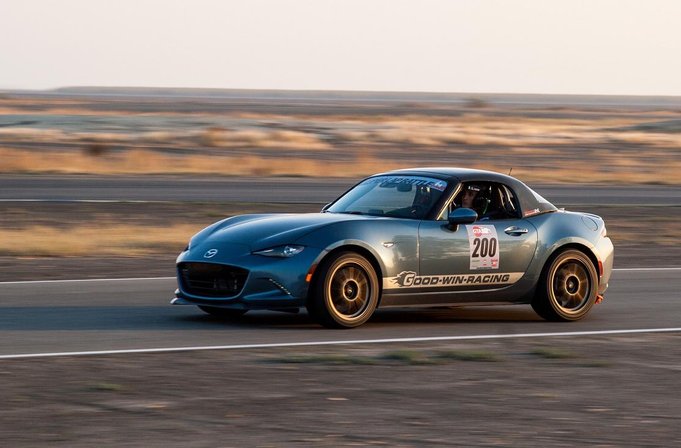 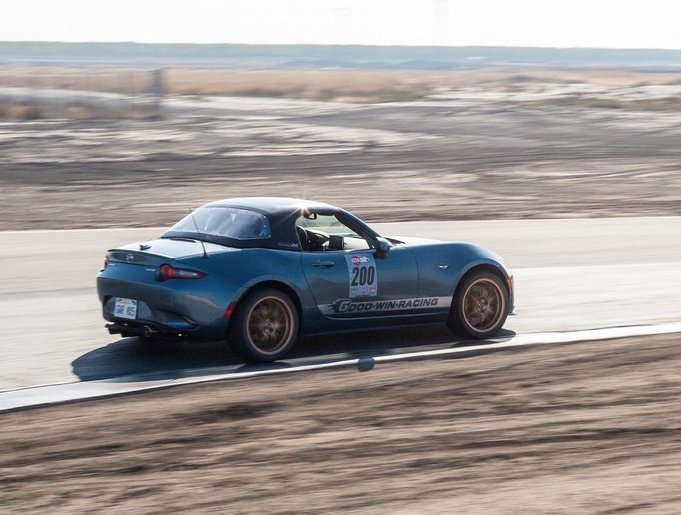 hi-res of the same 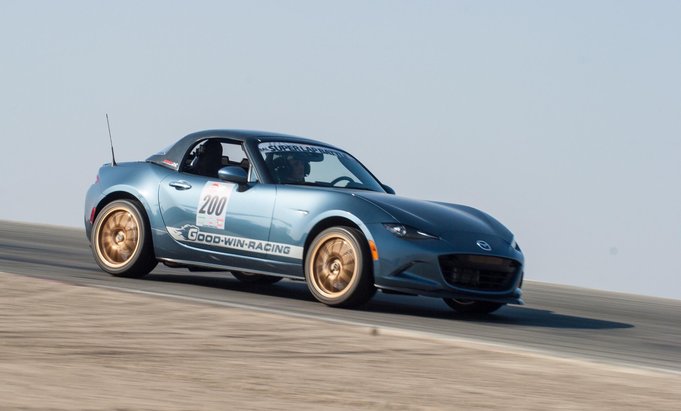 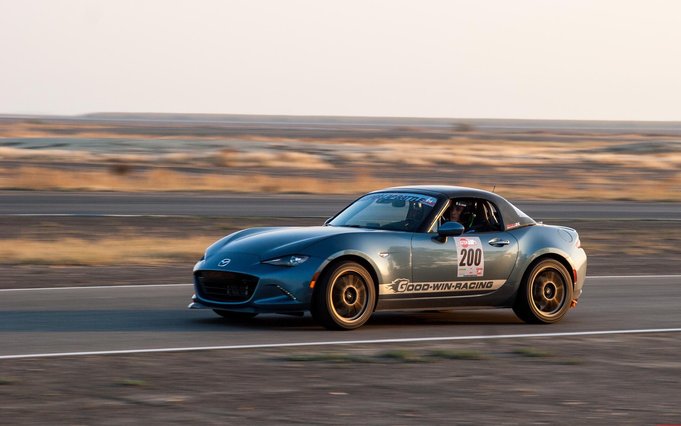