Every once in a while we get a report of adjustable coilovers contacting the top front control arms. Statistically, this happens with very few cars - for every one of these instances, we have hundreds of the same coilovers clearing without issues on other cars. So we put various years of miatas on the rack here, did some poking around, and got to the bottom of things.

When this issue does spring up it is with coilovers that have ride height adjustment independent of spring preload adjustment. This is a great feature to have, not something we would want to avoid, but that increases the diameter of the coilover assembly in the area where it passes through the front top control arms, making clearances tighter there.

First, we'll start with looking at the underside of an NB1 control arm (1999-2000). Note the amount of clearance to the shock in the area circled: 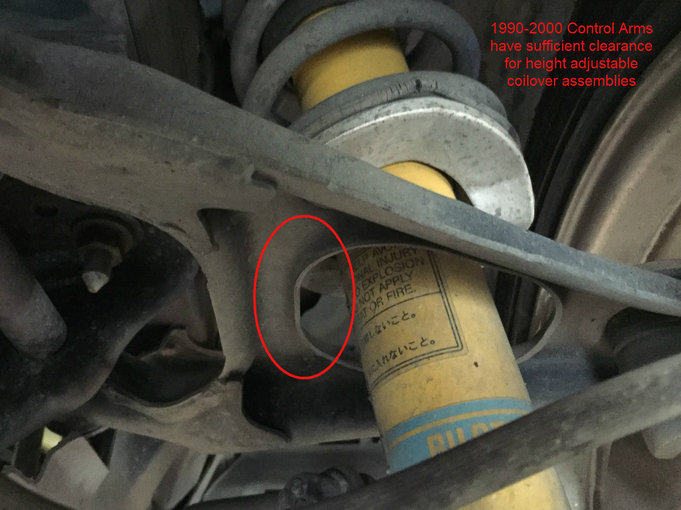 All control arms from 1990 to 2000 are the same in the area circled above. For the larger diameter aftermarket coilovers, that is ample clearance and everything fits fine. 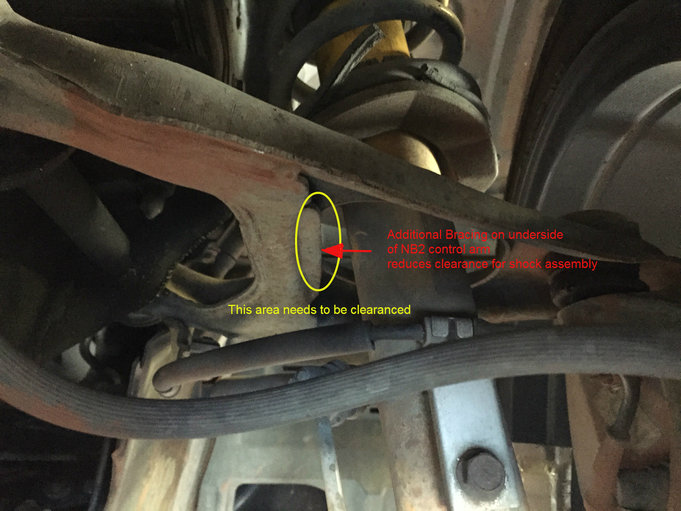 Additional bracing was added to the underside of the control arms on the later NBs, and this bracing protrudes into the shock's personal bubble by about 1/4". This reduces clearance to the coilover down to a very slim amount. Most NB2s still clear just barely, but there is some variation from car to car and in a few cases it is enough to make contact.

There are two ways to solve this issue. Note that not every NB2 needs this, but if you want to avoid performing the install and finding out the hard way that the clearance is too tight and risking scratching up your new coilovers, you may want to plan for one of the below solutions when going into the job:

A) When switching to aftermarket coilovers, source a set of used 1999-2000 upper front control arms to go in at the same time. These can easily be acquired from junk yards or any number of miata parts recycling resources. We've raced for years and years on the early control arms without any issues, so there is nothing to fear from the versions with less bracing.

B) With a bit of massaging, your existing control arms can be used. You just need to grind or shave the material highlighted in green in the picture below. There is more than one way to skin this cat, we have a plethora of tools in our shop here that could accomplish the job. My top choices would be an air grinder with carbide bit, which could even accomplish the job with everything mounted on the car. Depending on the tool, you may need to remove the control arm. Again, there is no issue with removing material here as the earlier control arms which don't have any of this additional material have been proven over millions of racing miles. 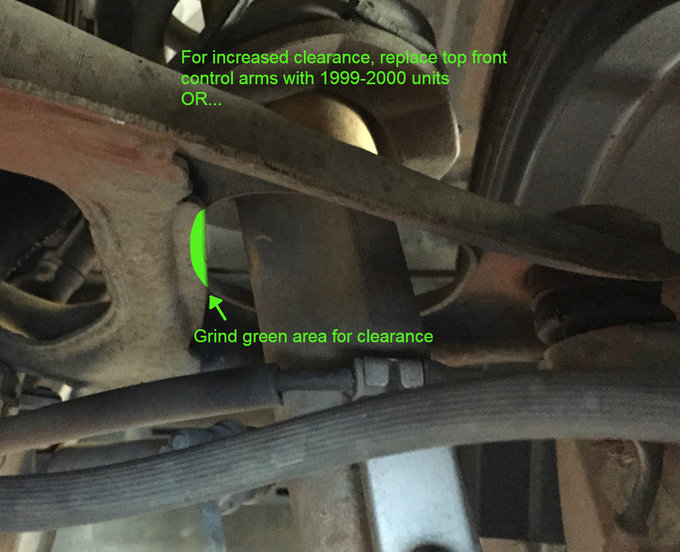