If your MX5 did not come with a shock tower brace from the factory, a cowl reinforcement
plate, part number 910-891, must be installed to fit this strut bar. Directions to install the
cowl reinforcement plate can be found at the end of these instructions.

Removal of the Factory Shock Brace
1) Disconnect the battery.
2) Remove the front section of the sound tube attached to the intake at the front of the engine bay. Remove
the two outside hose clamps, and the 10mm bolt securing the center of the tube. Figure 2. 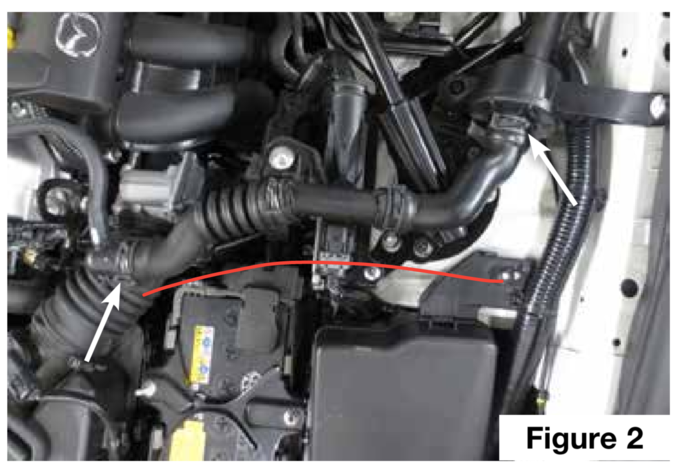 3) Move the sound tube chamber out of the way by removing the 10mm bolt securing it to the outside
edge of the engine compartment, and then lifting straight up to separate it from the shock tower plate.
Figure 3. 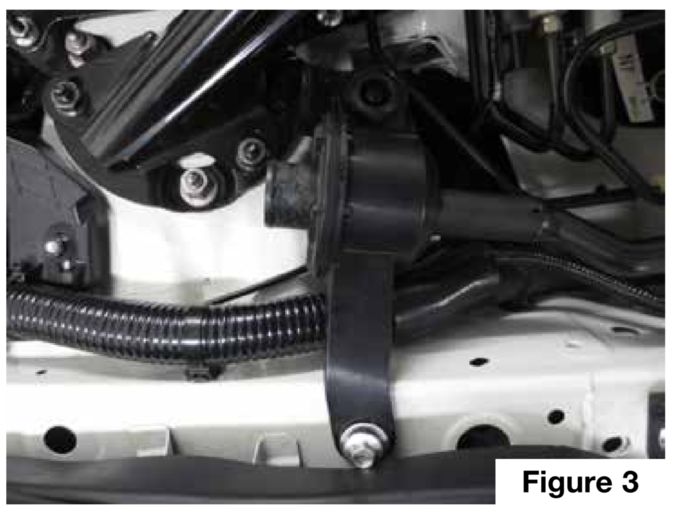 4) Remove the factory shock brace. Unfasten the six nuts securing the brace to the shock tower plates
and firewall. Pull out the rear section of the brace before the two side sections. Figure 4. 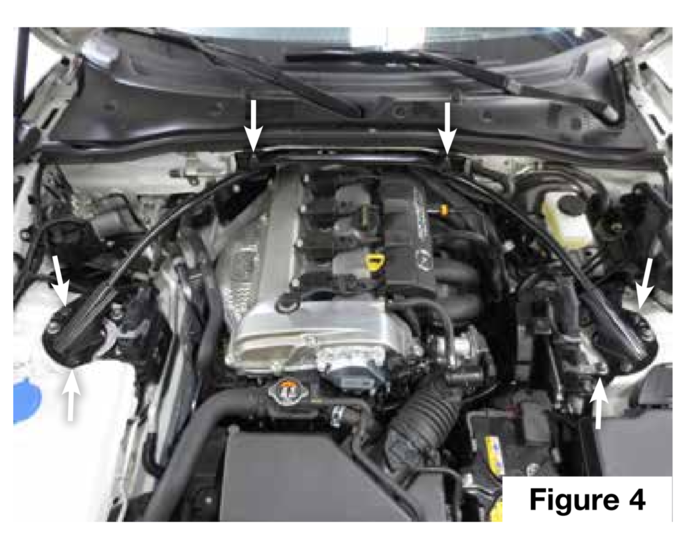 5) Move the EVP control unit fastened to the passenger side shock tower plate. Use needle nose pliers to
release the backs of the clips holding the wiring from the control unit. Unfasten the two 10mm bolts holding
the control unit bracket to the shock tower, and move it out of the way. The large connector on top of the
control unit does not need to be disconnected. Figure 5. 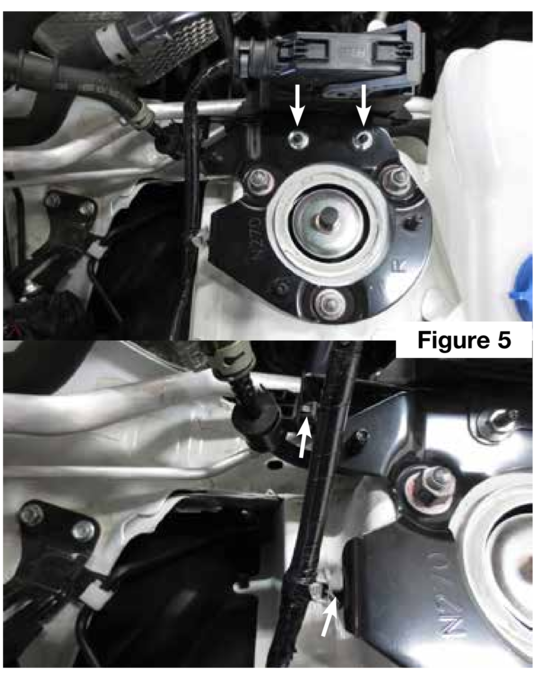 6) Remove the passenger side shock tower plate by unfastening the three 14mm nuts, and lifting it off of
the studs. Figure 6. 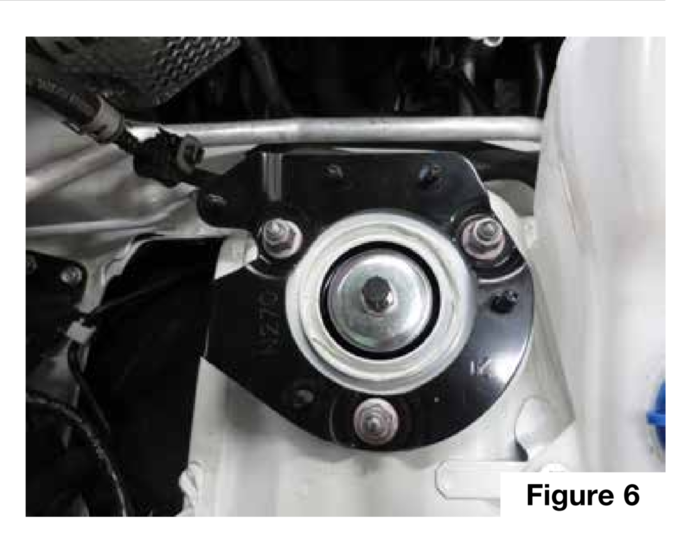 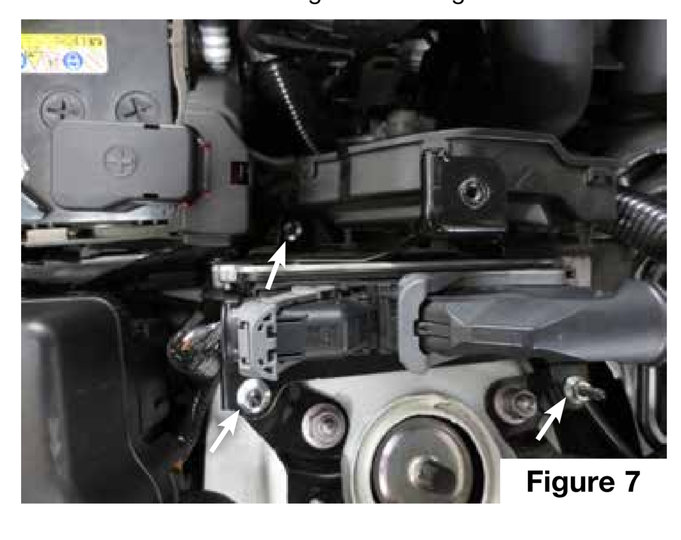 Remove the driver’s side shock tower plate by removing the three 14mm nuts.

9) Clean the shock tower surfaces where the new brace will be mounted. Any debris left over may damage the paint. 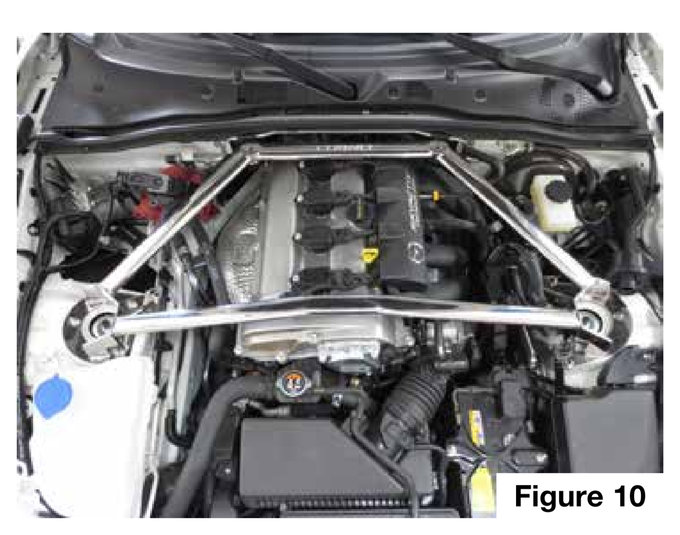 11) Using the nuts that were removed earlier, secure the new brace. Torque the six shock tower nuts to 37-43
ft-lbs, and the two firewall nuts to 12-19 ft-lbs.

12) Bolt the EVP control unit on the passenger side of the vehicle to the shock brace using the two included
M6x35 bolts, washers, and nuts.

13) Remove the D shaped clip from its line and bushing located near the EVP control unit. Flip it upside down
and reinstall it to fit the hole in the bracket attached to the control unit. The rubber bushing underneath
will need to be moved up. When everything is in place, install the clip into the bracket. Figure 13. 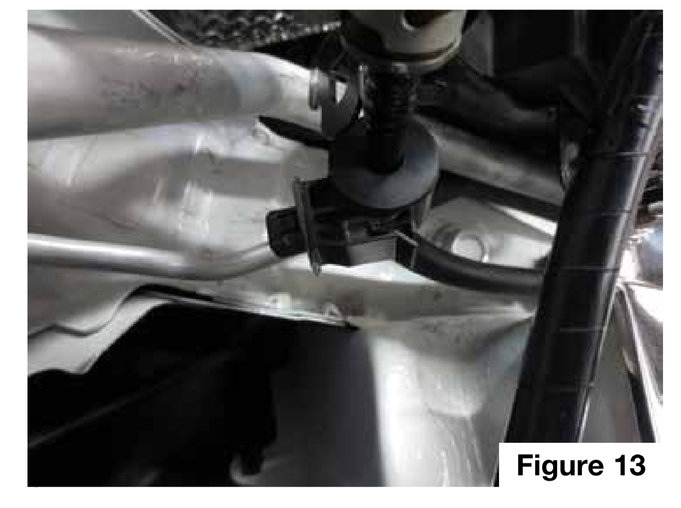 14) On the driver’s side of the vehicle, mount the ecu back in its original location. Use the original bolt
to secure the lower mount of the ecu, and the two M6x25 bolts, washers, and nuts to secure the top two
mounting holes. Figure 14.

15) Mount the sound tube chamber into place on the driver’s side. Use the original bolt to secure the
outside mount, and the included M6x40 bolt, 20mm washer, and nut to install the other side to the shock
brace. Figure 15. 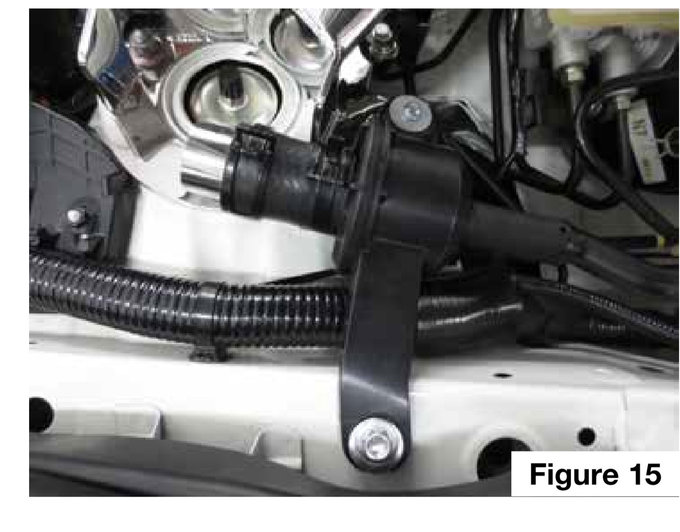 16) Make a connector using the small stainless steel pipe and rubber hose included in the kit. Push the pipe
into the hose until approximately 3/4” of the pipe is sticking out, and use one of the included hose
clamps to secure them together. Figure 15.

17) Mount the rubber side of the connector onto the sound tube chamber, and secure it with the second
clamp from the kit.

18) Using the original bolt, install the long end of the included bracket where the center of the sound tube
was originally mounted. Figure 18. 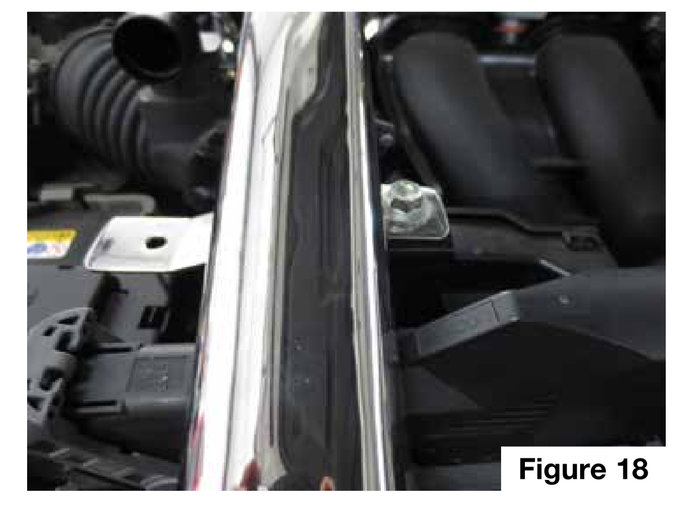 19) Rotate the portion of the sound tube that connects to the intake 180 degrees, so that the bottom is now
facing up. Figure 19. 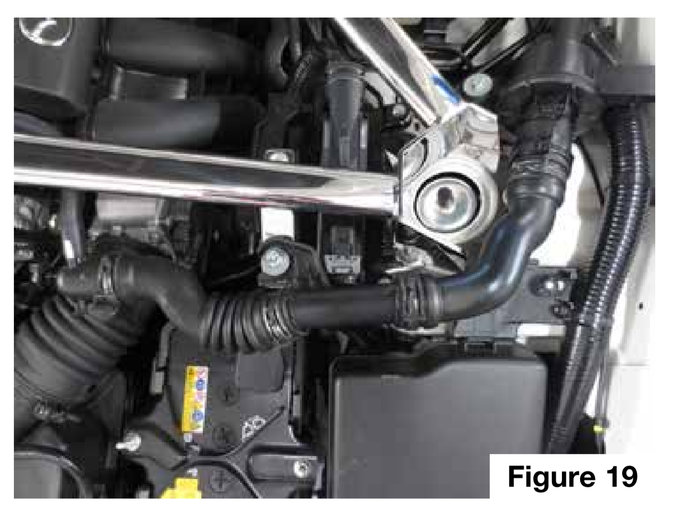 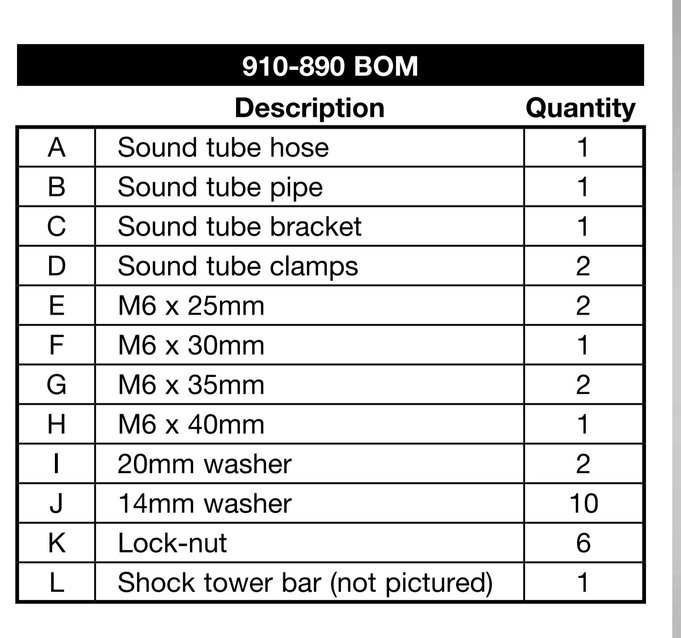 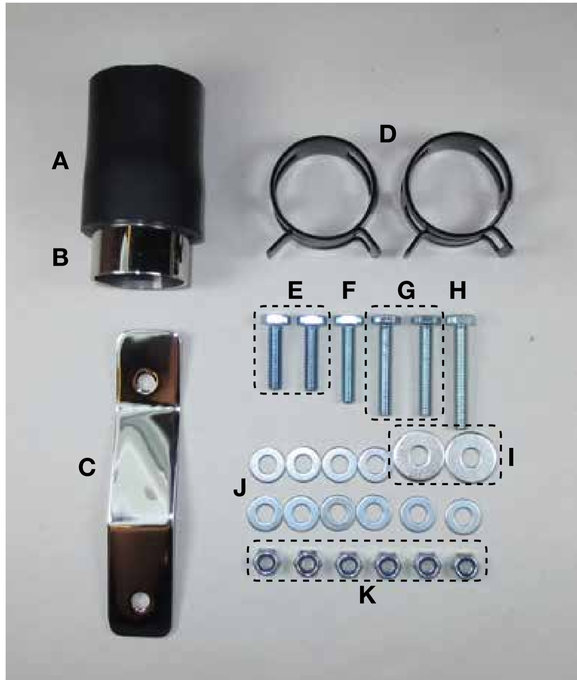 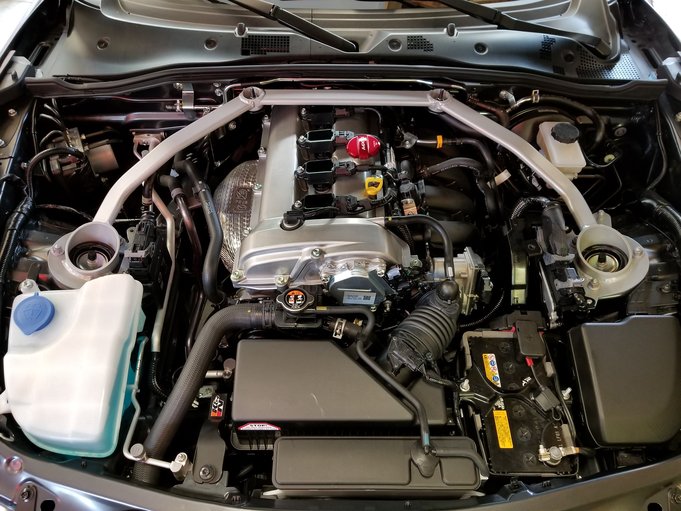 Rear shock tower brace has same torque specs but requires some minor trim of trunk liner as shown here. Shock tower nuts to 37-43ft-lbs, nuts in the middle span of brace to 12-19 ft-lbs. 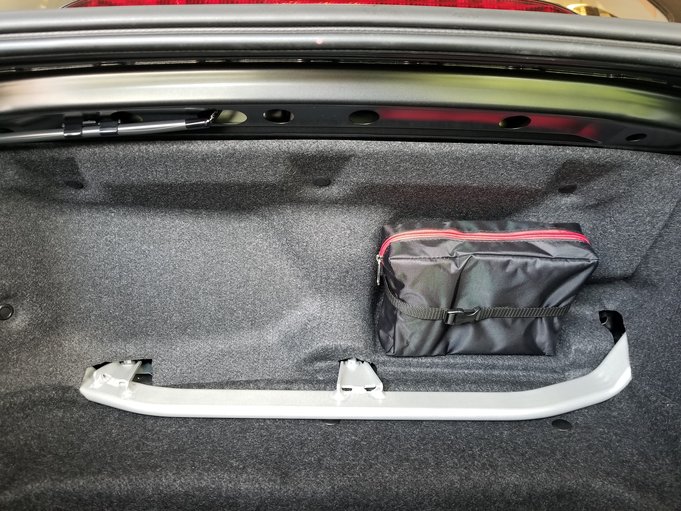 Just installed mine with the Edelbrock S/C.

Very light. Looks great. Install was (as it typically is) not as simple as I would have thought.

I didn't have all the hardware (screws/bolts) but fortunately I have a ton of nuts/bolts/lock washers in my garage for times just like this.

You can see on the passenger side the two bolts holding the surge tank and evap unit. These are quite a joy to install because of the low clearance beneath them. Had to jack up the car because of course the first bolt dropped down on the engine cover below and had to remove cover to retrieve them.

It's a very tight squeeze and awkward position. I ended up loosening all the attachment points on to the car and after that I was able to slightly lift the brace a bit to get my fingers to hold the bolt in. On the stock plate there are threads attached to the plate so it's not an issue.

Once that was done it was pretty simple install. Driver side ECU attachment was easy as there is plenty of clearance beneath the bolt for your hand. 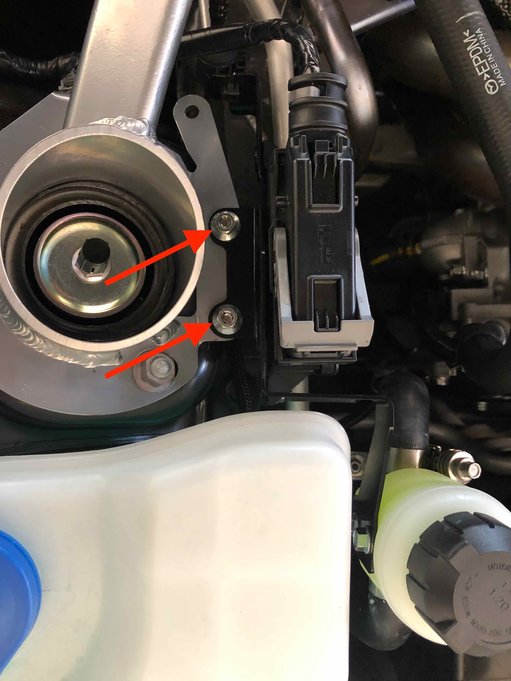 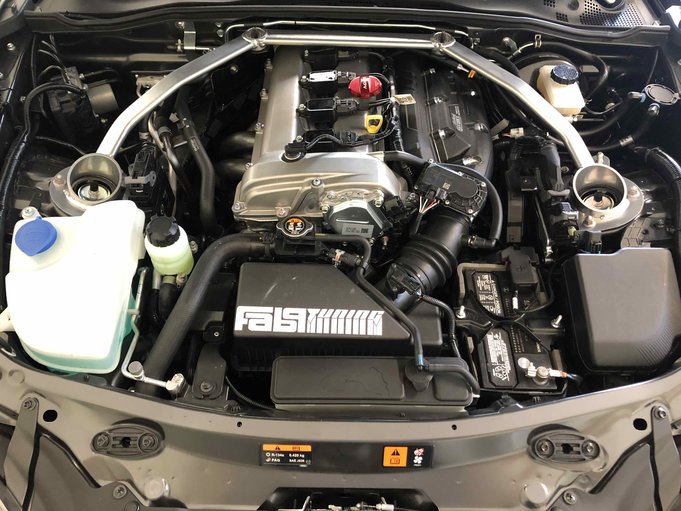