Tested on Sunday, ran the car round and round till it read completely empty in the main tank, got another half lap out of it and then it started to sputter and came to a stop a few turns later. Towed back to the pits, pulled the top fitting from the surge tank and ran a dipstick down it to see how low we ran it. There was only about 3/4" of fuel left in the bottom of the surge tank. That's like, 1/20th of a gallon. Yep, it's working.

With the fuel starvation issue out of the way, I'm able to peel back a layer and find the next issue that was buried a bit deeper. It seems I have a communication issue between the ECU and throttle body, which ALSO sends the ECU into limp mode, just like the fuel starvation. This helps everything make a lot more sense because at GTA Finals we were scratching our heads because sometimes it would go into limp mode under one set of circumstances that we were sure was fuel level related, and then other times it would go into limp mode under circumstances that couldn't possibly be fuel level related. With one out of the way, it was a lot easier to find the second. In the morning it would go straight into limp mode upon startup or after a short bit of driving, then after a good ol' code clear and tug on connectors and wires by hand, it started working. Ryan Helmuth, another LFX Miata head, was at the track the same day and when I had the issue narrowed down to ECU, TB, or wiring, he very awesomely offered to loan me his throttle body for a session to see if that made a difference. I ran a session with his TB, then a session with mine, both successfully, so I feel we've crossed that off the list and I think it's down to the wiring and factory connector. I need to try to find that factory connector in fresh form so I can run new wires from the ECU with proper strain relief, heat protection, etc. and pin a fresh connector at the TB, then go test again. 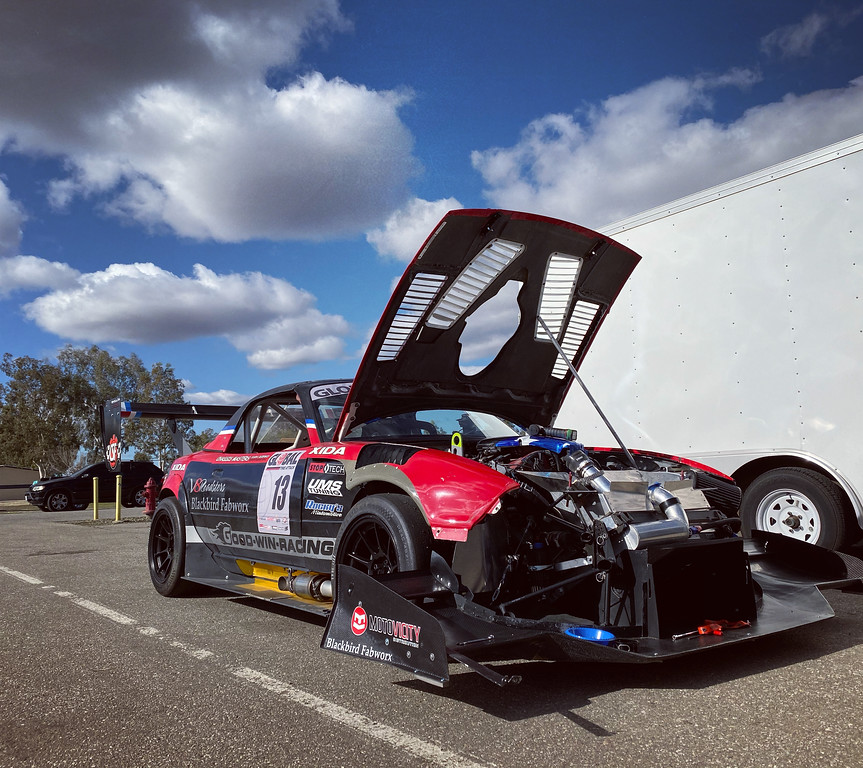 Some fancy new rear hubs just arrived. For those who noticed that we took one of the GWR NCs to Superlap Battle USA in February, waiting on these hubs and a couple other custom parts is the reason Hyper didn't make it.

But we have them now! Onward!

I've been quietly working on Hyper in bits of spare time here and there. Lots of cool stuff in the works. Debated about how much to share because inevitably once I start showing stuff others start to copy it. But I'll risk it, want to bring you guys along on the journey.

Let's start off with explaining that this update is specifically and only happening because of where this car competes. Global Time Attack has evolved to now require a spec tire model in each class. The tire for Limited class is the A052 and that is not available in any wide sizes for 15" wheels. Fitting larger wheels on a Miata properly is not an easy feat, and this likely means we'll see less NAs/NBs competing in GTA events. But unlike others who run their cars for fun in many different series, the HyperMiata is a single-focus car that is all about trying to earn that top spot at the largest time attack event, and that is GTA. So I'm doubling down and committing a lot of time and money to converting this car to run some big rubber.

Custom 5x114 front and rear hubs get the wheels bolted to the car:

Brakes have to be changed to work with the new hubs. I've got half the parts or so for that already with drawings done and parts in the works for the rest.

Now let me be clear: our recommendation has always been and will continue to be that you NEVER want to put large 17" or 18" wheels on an NA/NB. Don't do it! This car's situation is so specific, and even then I agonized over whether to pull the trigger on this for a while. The new tire offers a larger contact patch and stickier compound than the smaller Rivals we were running, so the potential is there for more speed, but there are some massive challenges caused by the larger wheels that all have to be overcome otherwise it's just a big step backwards.

Custom hubs and brakes are the easy part. The real mountain of work is in providing room for the massive wheel's range of motion.

Current state of things is I've been cutting... and cutting... and cutting. Basically cut out as much car as needed until full range of motion is there, and then see how much car is left and rebuild around that. This is cutting into some rather critical parts of the tub so as I'm cutting I'm planning how I'm going to rebuild these areas to keep load transfer through the areas that need it. Otherwise the car would end up a floppy mess.

This is where the front is at, with still some more cutting to go. Those holes go into the interior of the car. If the fiberglass blanket wasn't in the footwell and someone was sitting in there, you'd see their feet through the hole.

The rear is nearly done in terms of cutting and I've started some of the new pieces.

Yep, that's the new rear wheel tub protruding through the rear parcel shelf into the interior of the car:

When the sheet metal is done, the bodywork will be a whole separate project because new fenders will be needed. Feels like I've been at it for a while already but there's a mountain of hours ahead. Right now I'm just putting my head down and keeping on plugging away at it day by day. We'll get there.

Always impressed at how far you are willing to push to make this Miata even faster. Thanks for sharing.

Does the effective taller gearing work out well with the extra HP now available, or will it require changing out the rear gears? Those big wheels and tires are going to make it look super aggressive - can't wait to see the new wickedness.

MitchC635 wrote:Always impressed at how far you are willing to push to make this Miata even faster. Thanks for sharing.

Does the effective taller gearing work out well with the extra HP now available, or will it require changing out the rear gears? Those big wheels and tires are going to make it look super aggressive - can't wait to see the new wickedness.

The extra power certainly helps make everything turn, but gearing choice is no less important than ever. This change is happening while I'm also working on changing out the factory Camaro transmission for a 4 speed race box. The benefits of a race focused gearbox are lighter weight and can handle all the power I can ever hope to throw at it, but one challenge with most race transmissions is that top gear is almost always 1:1, whereas street transmissions usually have an overdrive gear. That 1:1 happens to work out well for me though - with a 23" tall tire (typical for 15" wheel) top gear would be too short and I'd have to try to find a very long rear end ratio to make up for it, but the 25" tire diameter stretches that out to get the top speed right about where we need it. Works out nicely. Another benefit of the race box is getting to choose the gear ratios for 1st, 2nd and 3rd, so with the new trans the spread between gears will be more ideal than the stock Camaro trans had for 3rd 4th and 5th.

Comparing to the Camaro trans you could look at it like this - With the ratios I chose, I effectively lose a 1st and 2nd gear, (which I won't miss because it's not a street car) and 3rd through 6th are now all much better optimized and much stronger than before. And lighter.

Detour from cutting up the chassis for a moment. After months of measuring, drawing, triple checking and revising drawings... parts are materializing to move the transmission project forward.

Got this picture from CNC of the adapter plate being born:

Less than 24 hours later I had it test fit to the motor, a couple final adjustments made, and now it's off to anodizing:

With the adapter here I was able to do a final mock up of the bellhousing and trim that down to clear the thermostat housing on the motor:
​​​​​​​

And apparently Monday all the stars and planets were aligned because on that same day the custom flywheel arrived. This baby is CNC'd from a single piece of chromoly, designed for a 7.25" twin plate clutch, with a welded ring gear and integral pilot bearing (So happy to have a pilot bearing after the MV5/7 design that doesn't have one). It's almost 10 lbs lighter than the 'lightweight' aluminum flywheel from Spec, and almost 20 lbs lighter than the factory flywheel.

Left side of car is finished cutting. Before I start welding stuff in I have to cut the other side to match.

Still early days on this project but getting pretty excited for how it's going to turn out. Approaching this from the standpoint of picking the wheel and tire I want to be on, placing the chassis where I want it relative to that, and just making everything else work around that. It's the right way to do it... but certainly intrusive. The list of items and areas that have to be cut, modified, relocated, reinforced, etc. has grown substantially from what I had in mind going into it.